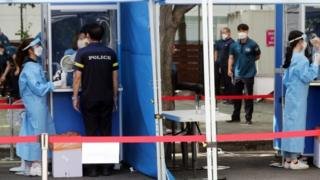 Museums, nightclubs and karaoke bars have closed in and around South Korea’s capital, Seoul, as Covid-19 cases reach a five-month high.

The country reported another 297 new cases on Wednesday – the highest daily figure since March.

South Korea is viewed as one of the world’s coronavirus success stories for its management of the disease.

But a spike in new cases linked mostly to a church has sparked concerns of a wider outbreak.

Wednesday saw a three-digit increase in cases for a sixth day after weeks with numbers generally around the 40s. Of the 297 infections reported, 252 were in the greater Seoul area.

Many of the new cases have been linked to the Sarang Jeil Church, whose pastor has been a vocal critic of President Moon Jae-in.

It follows another outbreak at a different place of worship, the Shincheonji Church of Jesus, which was identified earlier this year as South Korea’s biggest virus cluster.

The controversial group was found to be linked to more than 5,200 cases.

In total 623 members of Sarang Jeil Church have been infected so far, according to the Korea Centers for Disease Control and Prevention (KCDC).

Ten of these were people confirmed to have attended anti-government demonstrations on the past two weekends in Seoul, Reuters reported on Tuesday.

This is a moment of “grave crisis” in South Korea’s fight against coronavirus, say health officials.

There are two main concerns. First that the outbreak is in the highly populated greater Seoul area, and secondly that the cluster involves yet another highly secretive church and hundreds of members have provided false contact details at gatherings.

Let’s not forget, South Korea has been in this position before and prevailed. Its highly efficient track-and-trace system, paired with multiple testing facilities, has brought cluster outbreaks under control.

But Sarang Jeil church members rallied in the centre of Seoul at the weekend, ignoring warnings from health officials that they risked spreading the virus.

Domestic media has also shown footage of church members shouting and swearing at virus contact tracers. It seems some of them believe that this is part of a conspiracy to close the right wing church, which is highly critical of President Moon’s administration. They are also reluctant to comply with quarantine orders or get a test.

Authorities have the power to introduce stricter social distancing guidelines and they have shut down facilities such as karaoke rooms and nightclubs. Most companies based in Seoul have also told their employees to work from home.

But tracking down reluctant church members who are most at risk of catching and spreading the virus may prove more difficult.

Authorities have already banned all in-person church services as they try to trace congregation members to ask them to self-quarantine and get tested.

“We’re facing a crisis where if the current spread isn’t controlled, it would bring an exponential rise in cases, which could in turn lead to the collapse of our medical system and enormous economic damage,” said Jeong Eun-kyeong, director of Korea Centers for Disease Control and Prevention, earlier this week.