Jules Cuthbert is getting used to cancelling holidays. The 41-year old mother of two from Bristol abandoned plans for an October half term trip to Merthyr Tydfil when the south Wales town went into lockdown on 22 September. It was the fifth UK holiday she has had to postpone since the start of the pandemic and it may not be the last. As coronavirus cases continue to rise, Cuthbert is unsure whether to go ahead with her half-term plan B – a few days in the South Downs. “I’m now rethinking whether we should travel at all because we live in a highly populous area with a large student population. I’m a hospital pharmacist so I am very mindful of the potential risks of moving from an area with a high number of cases to one with less.”

Cuthbert’s experience is far from unusual. While many British holidaymakers managed to escape to the countryside during July and August, recent measures to contain the spread of the virus have thrown autumn and winter holidays plans into disarray and dashed any hopes that the half term holiday might help tourism businesses recoup some of the losses suffered during the first lockdown.

Local lockdowns, the rule of six and the 10pm curfew for restaurants and bars had already led to thousands of holiday cancellations and severely dented travellers’ confidence. Consumer research conduced by VisitBritain between 28 September and 2 October showed that just 10% of people were planning an overnight trip this month, with the majority (51%) blaming government travel restrictions for not feeling confident enough to travel, and 48% citing concerns about catching Covid. With more of the country now under high alert (tier 2) or very high alert (tier 3) tourism bosses say the situation can only worsen. 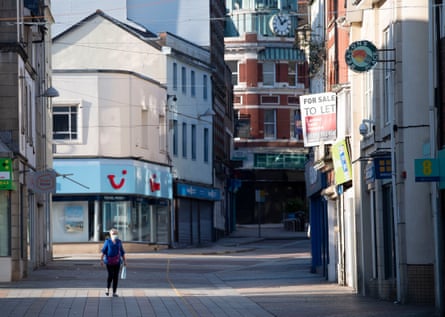 “It’s death by a thousands cuts,” said Rob Paterson, chief executive of Best Western, a group of 300 independently-owned hotels across the UK. “The most recent data shows that bookings for its hotels in northern England and Scotland are down by almost 70% compared with the same time last year. In London there has been a 65% year on year fall. The only part of the UK where bookings were strong was the south west where there have been no local lockdowns, but now hotels in the region are also seeing a year-on-year slump in business. Losing half-term bookings on top of a dire outlook for Christmas will be the last straw for some of the group’s hotels, said Paterson. “As soon as the new tier system was announced we saw a new booking behaviour. We are going to see more cancellations. Many hotel owners will now close until in March.”

“Nervousness has ramped up notably – we’ve seen a significant downturn in footfall across the region in the last two weeks,” she said.

Attractions remain open but falling visitor numbers, on top of already reduced capacity, has led many to scale back plans for events usually laid on over half term. In a recent poll by Welcome to Yorkshire, the region’s tourist board, a third of tourism businesses said they were cancelling activities for half term. “Business owners need certainty in order to invest [in events and activities]. If we continue with this stop-start in perpetuity, some businesses will just decide to fold,” said chief executive James Mason.

VisitBritain is predicting a 49% decline in domestic tourism spend in 2020, equating to a £44.9 billion loss to the economy. Thousands of people working in travel and tourism in the UK have already lost their jobs, with many more to come. The Association of Leading Visitor Attractions which represents some of the most popular institutions in the UK, from the National Trust to the Tate, reports that almost all of its 70 members are currently in redundancy consultations with staff. A report published by Globaldata last week summed up the grim outlook. “The upcoming months look bleak for the UK tourism industry and with the national infection rate continuing to surge, it appears there is no sign of let-up in the near future.”