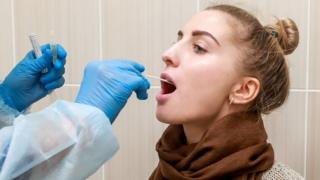 The swabs in some batches of one brand of coronavirus home-test kits are “not up to standard”, Health Secretary Matt Hancock has said.

As a precaution, the government says the kits made by Randox should not be used until further notice.

There is no evidence of harm being done and no impact on access to testing, Mr Hancock said.

Randox claims to be responsible for up to 17% of the total tests carried out in the UK.

The company is a healthcare diagnostics group based out of County Antrim in Northern Ireland.

The swabs are used to collect a sample from the back of the throat and nose, which is then sent to a lab to test for the virus.

Mr Hancock told the Commons he was contacted on Wednesday afternoon about the problem.

He said the certification behind the CE safety mark on the product was “not forthcoming”.

In a statement earlier on Thursday, the Department of Health and Social Care said: “The risk to safety is low and test results from Randox kits are not affected.”

It said it would be “supporting all testing settings to receive replacement kits as soon as possible”.

Tests kits produced by Randox Laboratories, which have been used in care homes and sent to people at home, are clearly marked with the company’s name.

Kits that have already been used can still be collected for processing as normal.

Baroness Dido Harding, head of NHS Test and Trace in England, which has a separate contract with Randox, said it was too early to comment on the impact of the safety issue, but she said test results were “not affected”.