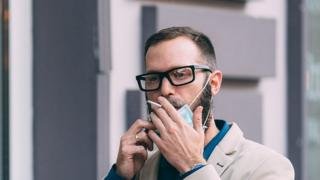 More than one million people have given up smoking since the Covid-19 pandemic hit, a survey for charity Action on Smoking and Health (Ash) suggests.

Of those who had quit in the previous four months, 41% said it was in direct response to coronavirus.

Separately, University College London (UCL) found more people quit smoking in the year to June 2020 than in any year since its survey began in 2007.

Government advice says smokers may be at risk of more severe Covid symptoms.

Between 15 April and 20 June, a representative sample of 10,000 people, enrolled by pollster YouGov on behalf of Ash, were asked about their smoking habits.

The results were used to estimate the total number of people giving up smoking in the UK.

Just under half of people who had quit in the past four months said the pandemic had played a role in their decision. That may have been down to a range of factors including health concerns, access to tobacco while isolating or no longer smoking socially.

A team at University College London has been asking 1,000 people a month in England about their smoking habits since 2007 as part of the Smoking Toolkit Study.

In the year to June 2020, 7.6% of smokers taking part in the survey quit – almost a third higher than the average and the highest proportion since the survey began more than a decade ago.

Ash director Deborah Arnott said: “Over a million smokers have succeeded in stopping smoking since Covid-19 hit Britain, but that still leaves nearly five times as many who have carried on smoking.”

About 7 million people in the UK in total were smokers in 2019.

Ash is launching a stop-smoking campaign funded by the Department of Health and Social Care, targeting people in areas of the country with the highest rates of smoking.

Terrence Craggs, who lives in Newcastle, quit smoking after spending time in hospital on oxygen – although his coronavirus test was negative.

“I could hardly breathe,” he said. “I was hunting for air all the time. [The pandemic] is more of an incentive to stay off them, even though it’s more difficult at the moment because of the stress,” he told the BBC.

The North East has seen a bigger fall in smoker numbers than anywhere in England since 2005.

What are the risks?

The app, created by researchers at Guy’s and St Thomas’ hospitals and King’s College London, analysed data from more than 2.4 million UK participants.

Their analysis found smokers with a positive Covid-19 test were more than twice as likely as non-smokers with coronavirus to be hospitalised.

This aligns with research from the US which found hospitalised smokers with coronavirus were 1.8 times more likely to die.

Although the small number of smokers in the Zoe study who took a coronavirus test appeared to be less likely than non-smokers to test positive, they were more likely to report serious symptoms.

Some studies from around the world have suggested smoking may actually have a protective effect against coronavirus. This is based on groups of hospital patients where smokers seemed to be underrepresented, compared with their numbers in the wider population.

Dr Jamie Hartmann-Boyce, from the University of Oxford’s Centre for Evidence-Based Medicine, said there was a “biologically plausible” explanation – that nicotine could be blocking the same receptors use by the virus to get into your cells.

But, she said, the “clinical significance of these is entirely unclear”.

And “this isn’t consistent across studies and it’s unclear if the data from these studies are reliable,” she said.

Smoking itself, rather than just taking in nicotine through a patch or gum, is “uniquely deadly” she pointed out, meaning the the health harms far outweigh any potential benefit.

“Smoking causes damage to the lungs and airways and harms the immune system, reducing your ability to fight infection.”