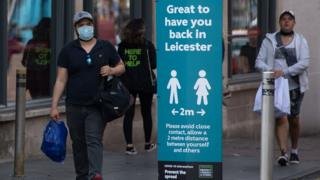 There is no obvious source for a recent surge in coronavirus cases in Leicester, a report has found.

Its analysis of cases showed more “young and middle-aged people” in the city had tested positive for Covid-19 than in other parts of the Midlands.

But the spread did not appear to be “unconstrained”, it found.

The report was released on the evening before schools in the city were due to close to all but a handful of children as part of local lockdown measures.

The preliminary investigation said the increase in reported cases could partly be due to a “growth in availability of testing” in Leicester.

It confirmed a concentration of new cases in the North Evington ward of the city.

The report said hospitals in Leicester were currently treating 80 patients with Covid-19, 10 of whom required ventilation.

Patient numbers had “decreased rapidly” since a surge in early April but new admissions had “remained steady” at between six and 10 per day throughout June.

On Monday, as he announced the local lockdown for the city, Health Secretary Matt Hancock said it had “10% of all positive cases” over the previous week.

The report said the increase in positive cases was “most marked” among the under-19 year group.

While there had been “good provision of primary school access for children” since the beginning of June, researchers said, they could find no “analytical link” between this and “any real or apparent rise in new infections”.

However, they said it would “seem sensible to investigate” in order to exclude a link between this and an increase in young people testing positive for Covid-19.

Five schools in the city closed as a result of positive coronavirus tests, it added.

From Thursday, all schools in the lockdown area will be closed to all but children of key workers and pupils deemed vulnerable or having educational or health needs.

The rapid response investigation found 3,216 Covid-19 cases had been confirmed in the city since the start of the epidemic in March, and the majority of positive cases were found through Pillar 1 tests – those conducted in hospitals.

But since May the bulk of Leicester’s infections have been discovered under Pillar 2 tests done outside of hospital.

The report said the increase in positive Pillar 2 tests is “probably linked, in part, to the availability of testing to the general public”.

Do you live, work or run a business in Leicester? Have you been affected by coronavirus? Email [email protected].

Please include a contact number if you are willing to speak to a BBC journalist.