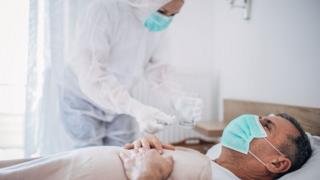 Coronavirus patients in hospital in England are dying at a slower rate now than they were at the peak of the epidemic, analysis suggests.

University of Oxford researchers found the proportion of coronavirus patients dying each day in England fell from 6% to 1.5% between April and June.

Improvements in treatments, changes in the patient population and seasonal effects could all play a role.

The data emerged as the government prepares to ease lockdown restrictions.

Around the height of the outbreak, on 8 April, there were 15,468 people in hospital in England with coronavirus of whom 899 died (6%).

By 21 June there were 2,698 hospitalised coronavirus patients, 30 of whom died (1%), according to the most recent data compiled University of Oxford’s Centre for Evidence-Based Medicine.

Hospital case fatality is a measure used since the beginning of the outbreak, providing consistent figures and enabling researchers to look for trends.

Prof Carl Heneghan, who carried out the analysis, said the pattern of falling death rates in hospitals was also being seen in other countries, including Italy,

“We should be investigating what’s changed,” he said.

“It’s a radically different disease we’re looking at if the death rate is 1% rather than 6%”.

He said that translated to a difference of 500 deaths a day in April when the disease was at its height.

“This is an encouraging trend but one that needs more work to understand the cause,” his co-author Jason Oke said.

Although the researchers were unable to determine exactly what was behind the trend, they put forward a number of reasons.

One is that, as more is understood about the disease, healthcare staff have been better able to treat it using existing drugs, even without any major breakthrough in new treatments.

For example, doctors are now primed to expect patients with blood clotting and overactive immune responses, whereas in the early days they were looking to treat the symptoms of what was seen as primarily a respiratory disease.

And in critical care patients, the common steroid dexamethasone is now being used to dampen down the out-of-control immune reactions that can cause organ damage.

This is likely to be a key factor, but is unlikely to completely explain the falling death rate, according to Prof Heneghan.

It may also be down to changes in the types of patients admitted to hospital.

As strain on the NHS has eased, the researchers say it is possible that there is room to admit patients who would not have met the stricter threshold for hospital care at the height of the epidemic. And these patients may be slightly less vulnerable and therefore less likely to die.

More sombrely, it’s also possible that the virus, having torn through the most vulnerable populations, has left behind people who were at lower risk to start with.

A further possibility is that there could be a group of patients in hospital for long periods, not being discharged but also not succumbing to the virus.

Summer might also be playing a protective role: there are fewer other illnesses in circulation to compromise people’s immune systems, and more sunlight means more Vitamin D.