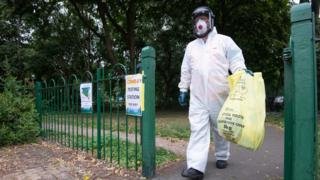 Local responses to coronavirus outbreaks could be threatened by a historic lack of investment in public health, government advisers warn.

Prof Chris Whitty and Sir Patrick Vallance were speaking as councils were given new powers to close indoor and outdoor spaces and cancel events.

They were being questioned by peers on whether local public health teams would be able to cope over winter.

Public Health England has identified 12 areas of concern around the country.

Leicester remains subject to the highest level of concern, followed by Blackburn and Pendle in Lancashire.

Speaking to peers on the Lords’ Science and Technology committee, the Chief Scientific Adviser Sir Patrick Vallance said, “countries that invested heavily in their public health systems” had coped best with the coronavirus pandemic.

This had not been the case in the UK, Sir Patrick said.

Chief Medical Officer for England, Prof Chris Whitty added health protection had not been invested in “over the last several years…I think we should all be honest about that”.

Discussing the further easing of restrictions trailed by the prime minister on Friday, Prof Whitty said there were things that could be relaxed for “three seasons of the year” that might not be possible in the winter – “because winter benefits respiratory diseases”.

The prime minister had made it “very clear” that some restrictions may have to be re-introduced, he said.

The higher the number of infections you have going into winter, the higher the likelihood is of having a “significant peak” in cases, Prof Whitty added.

On Friday, PHE set out the areas of England of greatest concern for local outbreaks.

While Leicester and nearby Oadby and Wigston are subject to “national intervention” in the form of an extended lockdown, Blackburn & Darwen and Pendle in Lancashire are receiving “enhanced support.

Eight other authorities in England including Barnsley, Kirklees and Oldham were listed as “areas of concern”.

The positions of Bradford and Sheffield, while still areas of concern, had improved on last week, while Wakefield and Peterborough had moved up the watch-list.