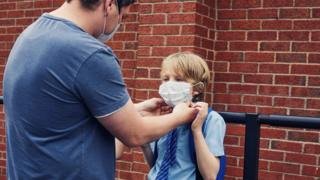 Children can carry coronavirus in their noses for up to three weeks, according to a study from South Korea.

Earlier studies have found the vast majority of children with the virus have mild or no symptoms.

But these findings shed light on the unresolved question of how likely children are to spread the virus to others.

The study emphasises the continuing role of social distancing and good hygiene as children go back to school.

The president of the Royal College of Paediatrics and Child Health, Prof Russell Viner explains there are three separate, but linked questions about children and Covid-19:

While we know for sure that children can catch the virus, Prof Viner says data from antibody blood tests suggest they may be less susceptible to catching it than adults – particularly children under the age of 12.

And scientists are very confident that children are less likely to become ill than adults even if they do catch it, with many not showing any symptoms at all. That’s what the British study, published on Friday, confirms.

The third question is the one we know least about, and it’s this the South Korean study attempts to address.

What does the South Korean study say?

The study, based on 91 children, found that even among those with few or no symptoms, virus could be found in their swabs as much as three weeks later.

The fact they had detectable virus in their noses, the authors concluded, suggested they were capable of passing it on.

Because of the way South Korea tested, traced and isolated cases, even those without symptoms, it is uniquely placed to look at this group.

Once they had identified and isolated cases, the patients were repeatedly tested until the virus had cleared.

The study was therefore able to give us some new information about children as carriers of the virus, and their potential capacity to be spreading it onwards.

Like other studies, though, it still leaves a missing piece of the puzzle.

Just because virus is found in a child’s nose does not definitively prove they are transmitting it at the same rate as adults.

Dr Roberta DeBiasi, chief of the paediatric diseases division at the Children’s National Hospital in Washington DC, said it would be “illogical to think children have no role in transmission” given they do carry the virus.

But professor of child health at the University of Liverpool, Prof Calum Semple said: “The presence of the virus genetic material in swabs in the respiratory tract need not equate with transmission, particularly in people who do not have important symptoms such as cough and sneeze.”

So can we draw a conclusion?

Logic dictates that in both children and adults, people with no or few symptoms – who aren’t coughing and projecting the virus into the air – are likely to be less infectious, and children generally get milder cases of the disease.

But significant numbers of asymptomatic people could still have a noticeable effect on the infection rate.

And, as Prof Viner points out, keeping schools closed is not neutral either but poses its own set of risks – to children’s development, education and mental health.

While the exact risk children pose remains an open question for the moment, answering it will be vital to controlling future outbreaks.

Dr DeBiasi believes that while the “vast majority of infected children have mild or unrecognised disease,” they may play an “important” role in enabling the spread of infection through communities.