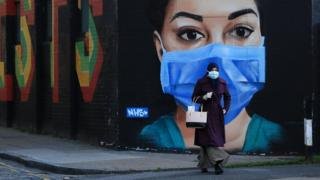 The NHS in England will get an extra £3bn of funding to prepare for a possible second wave of coronavirus, Boris Johnson is set to announce.

It follows warnings a second wave this winter could see around 120,000 Covid-19 deaths in UK hospitals.

The PM is also expected to use a press conference on Friday to commit to a new target for testing capacity.

Under the plans, capacity would be increased to 500,000 coronavirus tests a day by the end of October.

Downing Street said the funding would be available immediately and would allow the NHS to continue using additional private hospital capacity and maintain the temporary Nightingale hospitals until the end of March.

This would provide additional capacity for coronavirus patients, as well as allowing the NHS to carry out routine treatments and procedures, No 10 said.

Non-urgent operations were suspended to free up hospital beds as the UK went into lockdown during the first wave of coronavirus – but in May NHS England told hospitals they should restart.

In normal times an announcement of £3bn to help the NHS in England cope with winter pressures might look generous.

But these are not normal times as the government pumps tens of billions into the economy to soften the blows of the coronavirus crisis.

The head of NHS England, Sir Simon Stevens, has been in talks with the Treasury to get guarantees that the Nightingale hospitals can stay open through until next spring in case there is another Covid surge.

He also wanted secure funding in place to do a deal with private hospitals to help tackle the backlog of cancelled non urgent operations such as hip and knee replacements.

That money now seems to have been secured, though we await further details.

The question is, will this be enough to get the health service through what could be one of the most difficult winters in its history?

There have been predictions that the waiting list for routine surgery will swell to 10 million as fears of a second wave of Covid cases in the depths of winter won’t go away.

A No 10 spokesman said: “Thanks to the hard work and sacrifices of the British people, the virus is under control and we have eased restrictions in a cautious, phased way.

“But the prime minister is clear that now is not the time for complacency, and we must make sure our NHS is battle ready for winter.

“Tomorrow, he will set out a broad package of measures to protect against both a possible second wave, and to ease winter pressures and keep the public safe.”

The spokesman said the funding for England was new and not previously allocated, while expenditure will be set out for the devolved nations in due course.

By announcing this extra NHS funding, the prime minister is looking to reassure the public he is serious about dealing with the second wave, which may give him space to further ease the lockdown, BBC Newsnight political editor Nicholas Watt says.

The government sees this as a “very important moment as it seeks to open up society”, Watt adds, and there has been a lot of discussion in government about whether Mr Johnson will on Friday announce a “return to work” in a safe way.

The PM is very worried that people continuing to work from home means town and city centres are being “hollowed out economically”, Watt says.

The UK’s chief scientific adviser Sir Patrick Vallance told MPs on Thursday there was “absolutely no reason” to change the government’s current guidance on working from home.

Since late March the government has advised people to work from home if possible to help curb coronavirus.

But last week Mr Johnson signalled a change, saying: “I think we should now say, well, ‘Go back to work if you can’.”

Earlier this week a report, requested by Sir Patrick, called for immediate action to reduce the risks posed by a second wave of coronavirus this winter.

Among its recommendations were increasing the capacity of the test and trace programme and getting more people vaccinated against flu.

Asked to model a “reasonable” worst-case scenario, scientists suggested a range of between 24,500 and 251,000 virus-related deaths in hospitals alone, peaking in January and February.

The estimate does not take into account any lockdowns, treatments or vaccines.

Research suggests the virus can survive longer in colder conditions and is more likely to spread when people spend more time indoors.

Experts are also concerned the NHS will be under extreme pressure, not just from a resurgence of coronavirus but also from seasonal flu and a backlog of regular, non-coronavirus workload.

No 10 said the increased prevalence of seasonal illnesses was also likely to increase individual’s vulnerability to infection, particularly among the elderly.

The potential for a rise in other respiratory viruses with similar symptoms also presents challenges for the capacity of the government’s test and trace programme, Downing Street added.

Health Secretary Matt Hancock has already announced plans for the “biggest flu vaccination programme in history”, with expanded eligibility criteria expected to be set out shortly.